Winferno.com is a downloading website for rogue computer cleaning software such as Winferno Power Registry Cleaner. This type of product is promoted as capable of repairing Windows Registry errors, cleaning invalid registry keys, fixing broken program shortcuts, boosting the speed and enhancing the device's performance level when it truly operates as a fake system tool. The cleaner has been first developed for Windows XP only but now it is also working for newer Windows versions such as Windows 7, Windows 8, and Windows 10.

The main goal of Winferno Power Registry Cleaner is to promote its license key for the advanced program version that costs $39.99 yearly. For this, the program imitates system scans, collects outdated registry entries, and provides them as big system errors. The scan results mostly show hundreds or thousands of errors that do not exist. It is known that the tool can be downloaded from its original website winferno.com, e-shopping platforms such as Amazon but its most common distribution technique is software bundling when the product comes in a package together with bundled freeware or shareware.

2CR-015: The rogue product has been listed as a fake system tool by multiple cybersecurity researchers

ACR-003: The rogue product provides hundreds of non-existing system errors to make the users believe that they have problems with their computer system 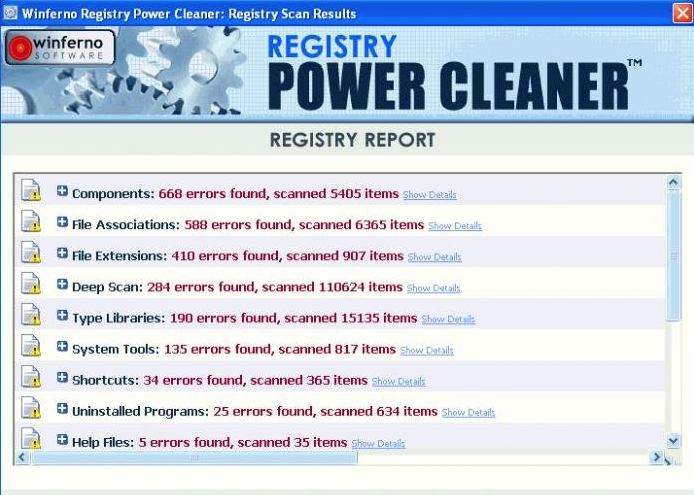