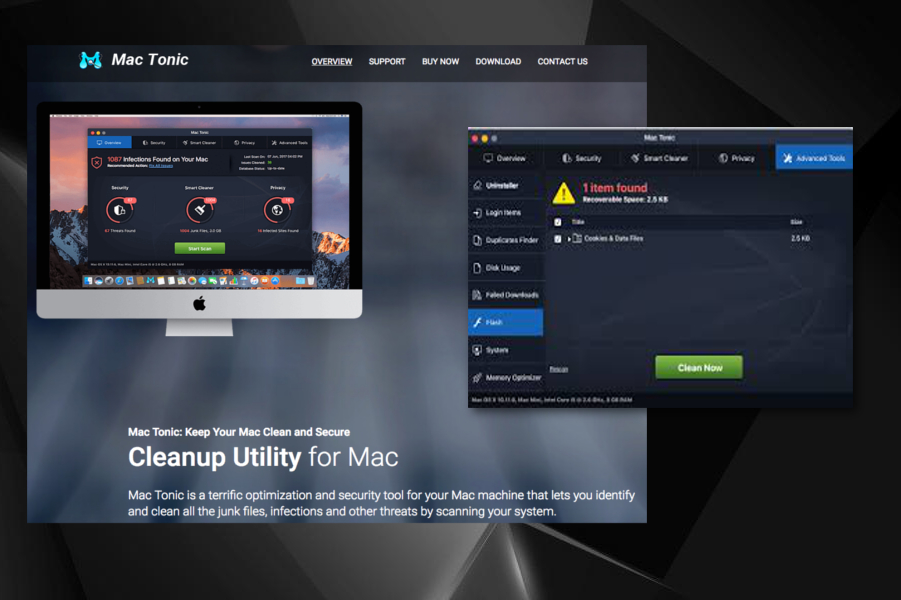 Typically, Mac computers are considered as virus-free and error-free devices. However, as the time goes by, it becomes obvious that this is not true. As a result, people start looking at tools that could “improve” the functionality of their the operating system. One of such apps might seem to be Mac Tonic.

Mac Tonic is a questionable PC optimization tool that got onto numerous headlines of security forums because of its unexpected appearance on users’ computers. According to its victims, the program infiltrated their computers together with the Adobe Shockwave or Adobe Flash Player upgrade. This PUP was especially active during the second week of July 2018 when people flooded forums asking about the trustworthiness of this optimization tool.

Although the name of this tool suggests an idea that it is legitimate software, beware that it has nothing to do with the improved PC’s performance. Just like many other PUPs, this program is promoted as an optimization tool that can detect and clean junk files, infections or outdated files. These features should improve the performance of your device and free space in the memory. Unfortunately, this program does the opposite. It affects the performance of your device but in a bad way because it makes your PC run slow. Additionally, no matter how clean your system is, it can start displaying long lists of malicious programs on your PC. As a result, the virus suggests buying a full version since this tool is created to swindle the money from computer users. The only thing this full version does is clearing up the list of threats that you probably never had in the first place.

While trying to mislead their users, the developers of this highly questionable software decided to “borrow” its name from another Mac Tonic – a legitimate software developed in Oregon. That’s why some part of infected users believes that Mac Tonic is legitimate. However, the company has already made a statement that bad guys are using its good reputation.

As of today, we know that many people got this PUP together with Adobe Shockwave updates without their consent. This is a typical way used by potentially unwanted programs to come in silently. After getting into the target PC system with the help of bundling, such apps start causing deceptive advertisements or redirects to sponsored domains.

Getting rid of fake optimization tools

Mac Tonic is not a virus, but it is not supposed to be on your computer. You need to remove it, but deleting the application might not be enough. Since it probably came during installation of other software, you might have more malicious pieces on your system. To detect all of them, you should either scan your system with appropriate tools like anti-malware or anti-virus or get rid of Mac Tonic from your computer by using this guide.

Cleaning your system fully might help, but you should know how to keep it safe in the future. If you want to avoid these infections, you need to remember that the safe installation of third party apps consists of: