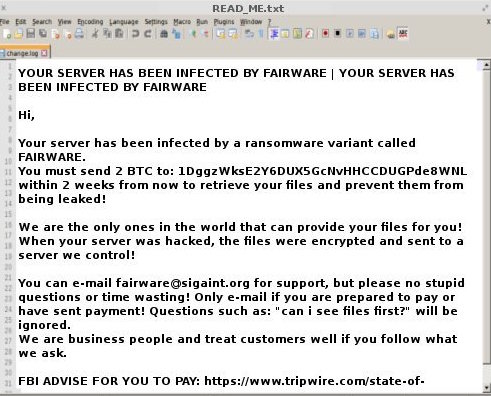 There is a widely known belief that Linux is immune to viruses. Unfortunately, but it seems that it is just a myth which should be forgotten. According to the latest reports of cyber security experts, hackers have just released a virus called FairWare ransomware. It is a ransomware-type malware that is capable of infecting Linux servers. Once it does that, it removes victim’s files and uploads them to its owners’ servers.

The first messages about FairWare ransomware showed up after one of its victims noticed that his websites are down. After logging into the Linux servers, the user noticed that the web folder is empty. Also, there was a “READ_ME.txt” file in it providing a link to a full ransom note. This note clearly states that the only way to get files back is to pay the ransom. Just like any other ransomware, it also tries to scare victims by saying that failing to pay the ransom can encourage its developers to leak the affected files.

It is quite ironic that hackers call themselves as “business people” and provide an email address for those victims who have questions or need help. However, they also claim that they won’t answer irrelevant questions, such as “Can I see files first?”. Well, all businesses have their own set of ethics, even the shady hackers. Unfortunately, we cannot inform you    whether paying the money helps you retrieve removed data. If you are considering paying the ransom, you should wait for a while.