Shocking: the most of PC users are still not aware of online protection methods 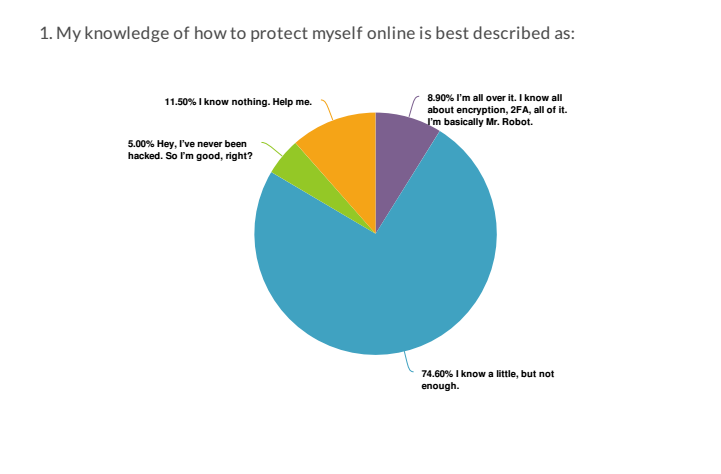 This week, tech giant Mozilla revealed the results of its poll involving the answers of more than 30,000 Internet users from Germany, France, the UK, Australia, Canada, the US and other world’s countries. The results are shocking: people are still reusing passwords, failing to update their security software and are wiling to share their personal information in exchange for some discount or a free coupon.

The most of respondents (74.6 percent) admitted that they know some rules how to stay safe online, but it’s definitely not everything what they should know and use in practice. However, 5 percent of respondents believe that they have never been hacked and chose the answer “I’m basically Mr. Robot.”

It seems that the least tech-savvy nation is France – 1 in 5 people admitted that they don’t know how to protect themselves on the Internet. Encryption, two-factor authentication and other methods that could help one stay anonymous and keep the private information safe are known only to 2/3 of respondents. The most familiar with encryption are Germans. The poll has also revealed the greatest online fears of today’s community – it’s “Being hacked by a stranger” and “Being tracked by advertisers”. However, it seems that people are also concerned about being tracked by the government, law enforcement agents and other state actors.

A full report of Mozilla can be found in this pfd document.

Your opinion regarding Shocking: the most of PC users are still not aware of online protection methods Cancel reply